..Alexis (Allison Turkel), representing the lesbian minority among the women, has powerful standings— especially when Turkel’s character gets riled up and starts the “march for me, march of one” segment that boils over into a discordant din of screaming, shouting, marching, and just trying to be heard as individuals when all they really succeed in doing is deafening one another so that no one’s voice is heard. All the performers in the production come together in a striking vocal finale, as well as group moments throughout the performance that sit with you, long after they’ve taken their bows. 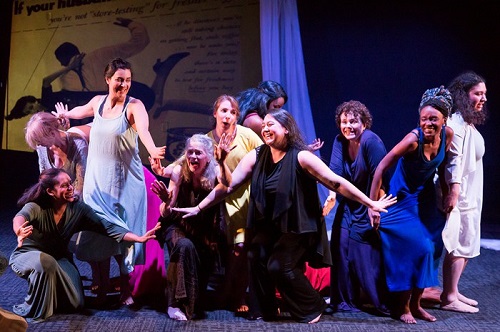 "Turkel’s performance, which took her from sick but functioning to close to death’s door, was full of richness and depth, heartbreaking at its core." 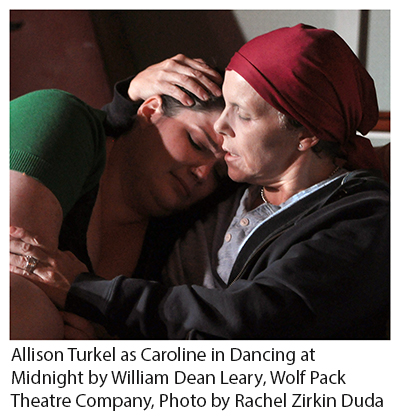 Thank you to DC Metro Theater Arts for their recognition of Allison Turkel as The Creature in "dry bones rising" by Cecelia Baker at Venus Theatre Company as one of the Best Performances in a Play in Professional Theaters for 2015 -- directed by Deb Randall. 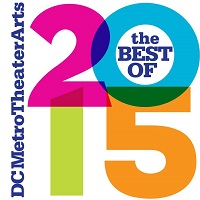 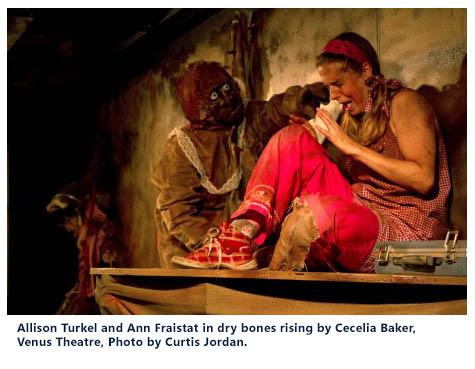 DC Theater Scene by Kelly McCorkendale on May 27, 2015

"Mudman (Allison Turkel) is a dirty, brown mess (again, no surprise there) with human eyes. He's uneasy on his feet. He grumbles and stumbles about. Mudman's hands provide for Him and Her and, later, divide them; he is both protector and destroyer. I know little about Jewish folklore, but Mudman seems to qualify as a spot-on depiction of the classic golem. Kudos to Turkel, who could have easily done very little with the part. Mudman is, after all, made of dirt/water and dumb, slow, helplessness, etc…. But, Turkel gives him a distinct walk, voice, and even finds ways of showing emotion and feeling. It's excellent work."

Survivalists form their own world in Venus Theatre's 'Dry Bones Rising' - The Baltimore Sun, Patti Restivo on June 13, 2015 "Venus newcomer Allison Turkel rounds out Randall's stand-out cast to make an excellent and multi-dimensional Mudman. From the moment the monster rises, Turkel balances a childlike innocence in mannerisms with edgy physicality suggesting the creature could turn on a dime. And Mudman's last scene is a stealer."

"The creature played with extraordinary creativity and specificity by Allison Turkel is sometimes mystical, sometimes horrifying, and may hold the key to either the redemption or destruction of the last remaining children on Earth. Turkel sports a jumpsuit painted to match the surrounding mud, and her face is covered with a beautiful Kabuki-like mask, created by Tara Cariaso. 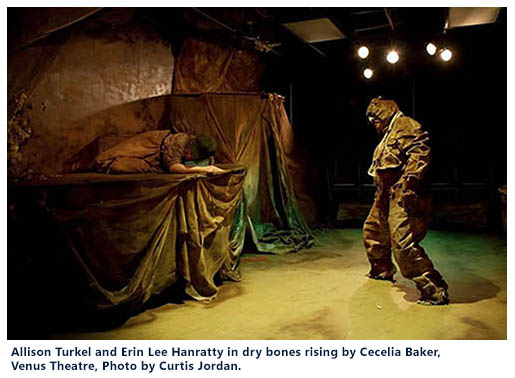 "Allison Turkel is not seen for nearly the first half of the production and when her character graces the stage it is unique in that it is not a Him nor a Her, but a Mudman. Turkel's physicality is what draws the attention first her flopping and flailing about as if never before having experienced movement the way humans do is shockingly on point. The dancing and gravelly voice come after; secondary and tertiary points of praiseworthy performance. There is a discombobulating energy coursing through Turkel's performance that binds her character to the mud it is made from as well as to its creators. Driven by the rhythmic underscore of McFadden's sound design, Turkel thoroughly embodies the process of animation and life." 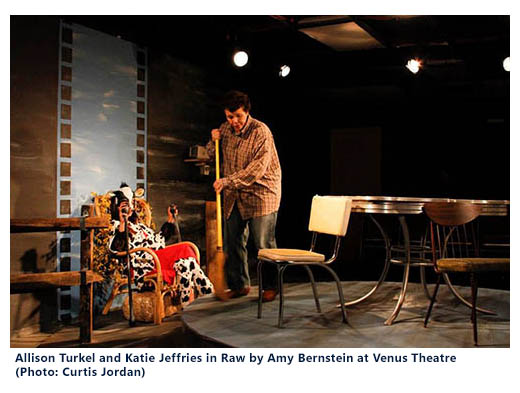 "And there is a lot for the taking, whether you choose to linger on the relationships within families and among women, so expertly depicted by the trio of Turkel, Barry, and Korn, the treatment of animals, the government's interest in farming, or the public health concerns attached to consuming bacteria laden, un-pasteurized milk." "Allison Turkel is perfectly cast as busy, busy, busy Eliza, trying to salvage her livelihood."

"Allison Turkel delivers salt of the earth grit in her portrayal of Eliza— a woman who is both sister and mother, farmer and activist. These dueling personalities bound up inside the single character of Eliza make for a challenging role, which Turkel tackles early on displaying a sense of unbreakable strength in her determination. Juxtaposing this rugged and filthy exterior of her personality with a rumble of anger to support it against a truly touching and heartfelt monologue describing her first experience milking a Caroline,exposes the versatility and dynamic range of Turkel's performing abilities. 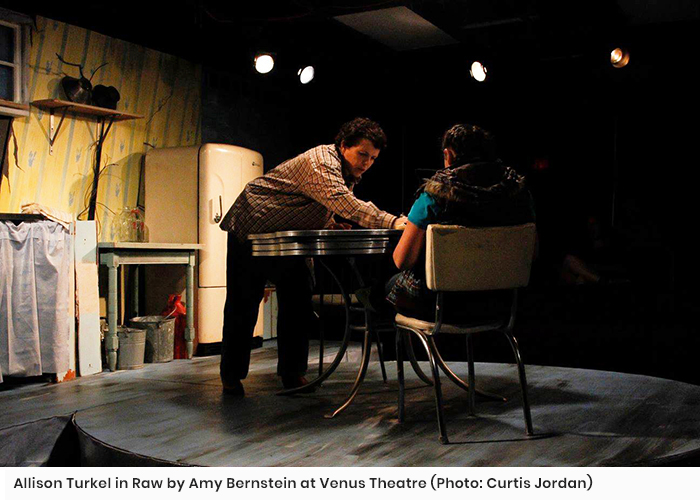 "The intimacy and naturalness of this seemingly-effortless conversational style in delivering lines is what distinguishes this play and this cast."
Interview with Allison Turkel on playing Nat. 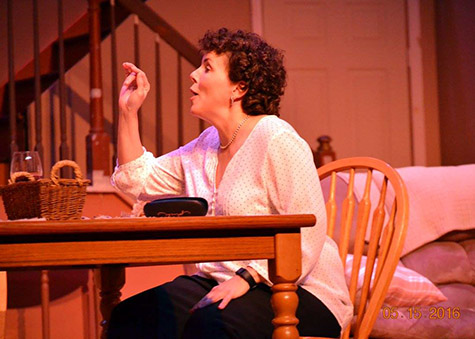 The Connection by David Siegel on March 24 2016 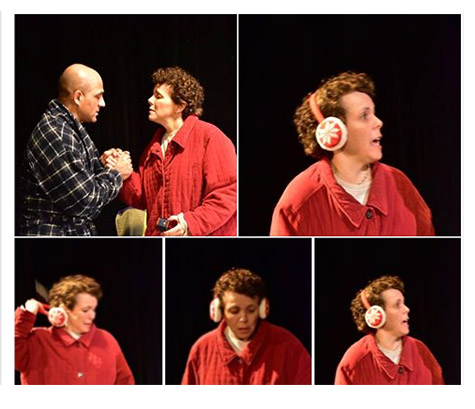 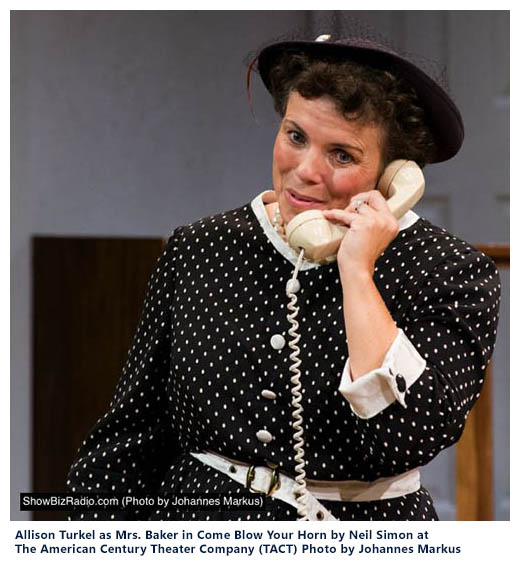 "While the sons are the lead roles, the parents get the chance to chew the scenery. Tinder earns laughs with his dyspeptic delivery of lines, while Turkel has the tour de force moment when she attempts to memorize several phone messages in succession."

"In a classic scene, Turkel nearly steals the first act as the boy's perpetually agitated mother, teetering on the edge of hysteria over a succession of bewildering phone messages and a missing pencil."

"Meanwhile, Turkel shines as the harried Baker matriarch. Her shrieking anxiety attack, unleashed by the merciless ringing of a telephone, is the funniest scene out of a very funny show."

"Comic energy abounds. The funny set-pieces are there, notably the futile search by the Mrs. Baker (Allison Turkel) for a pencil as one phone call after another comes in for her older son, Alan (Elliot Kashner); "

"Mrs. Baker is written as a stereotypical Jewish Mother, complete with guilt-tripping, a cleanliness fetish, and a periodic loss of emotional control. Turkel hits her marks securely and with feeling, highlighted by her pencil scene meltdown." 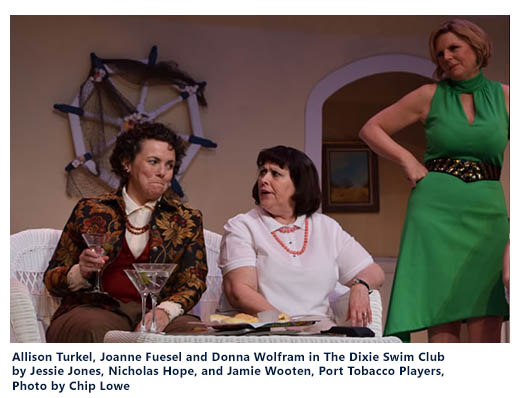 "..As Dinah, Allison Turkel exhibits self-assurance in her role, .."

"and Dinah confides a secret about her career, giving Ms. Turkel, making her PTP debut here, an opportunity to display her strong acting skills." 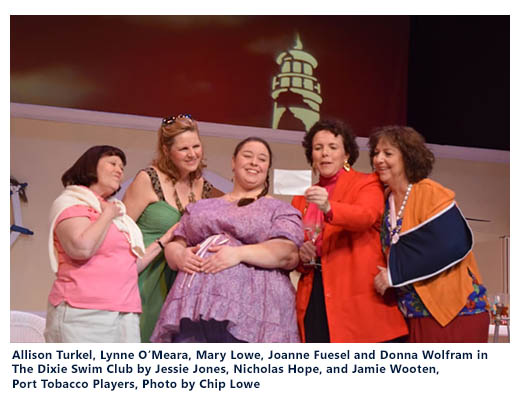 The sparkling conversation is matched only by the sparkling personalities of the actresses. The audience will have fallen in love with each of them when the time arrives for the play's closing moments, guaranteed."

"...the actress' diction was clear and individual vocal quality employed for the delicate southern accents resulted in pleasantly mellifluous tones."

The American Century Theater's (TACT) entertaining and colorful production of the 1958 Pulitzer Prize-winning and 1959 Tony Award-winning Best Play J.B. by Archibald MacLeish is 'way over the Big Top!' What a fine way to begin TACT's 2012-2013 season! 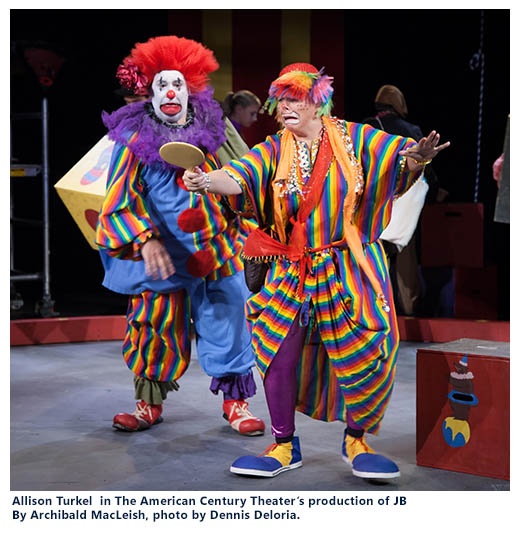